Inaugurated on 12 July 1989, with a great festival atmosphere, Port Fréjus restores to the city its maritime tradition. The Sulara, a stunning and elegant, two-mast sail boat, passed through the channel at 6:14 pm on 12 July 1989. François Léotard cut the ribbon. Port-Fréjus' harbour basin was inaugurated. The Mayor began his speech with, "we built this port for our children, just 11 years from the third millenium". He went on to say, "it is the latest and bravest response to the catastrophe of December 1959". After many acknowledgements, the Mayor pointed out, "Fréjus has always found the foundation stone for its future in its own roots. We no longer have the keys to the sea. The port is no longer military, but we have the key to the future: space, water, communication channels and more importantly, people". By creating Port de Fréjus, apart from the ambitious plan to provide the Municipality with a marina, the town's aim was always to develop and beautify the seafront of Fréjus-Plage, to eventually reflood the Roman port and thus, connect the Town Centre with the seafront thanks to a road filled with commercial, cultural and leisure activities, right along the water side. Construction work, which began in 1989, quickly enabled the realisation of most of these objectives and Port Fréjus quickly made a name for itself thanks to several of its features.

The Romans gave the name Forum Julii to Fréjus two thousand years ago, when they turned it into one of the most important military ports in the Mediterranean. Even larger than that of Massilia (Marseille), more active, more vibrant and prouder than its neighbours, it left an indellible mark on the history of Fréjus. Although time took its toll, despite the build up of silt and the state of neglect, the old port remained present in people's minds as though it was waiting for its time to come to restore to the town and to its inhabitants their shared destiny: the sea. 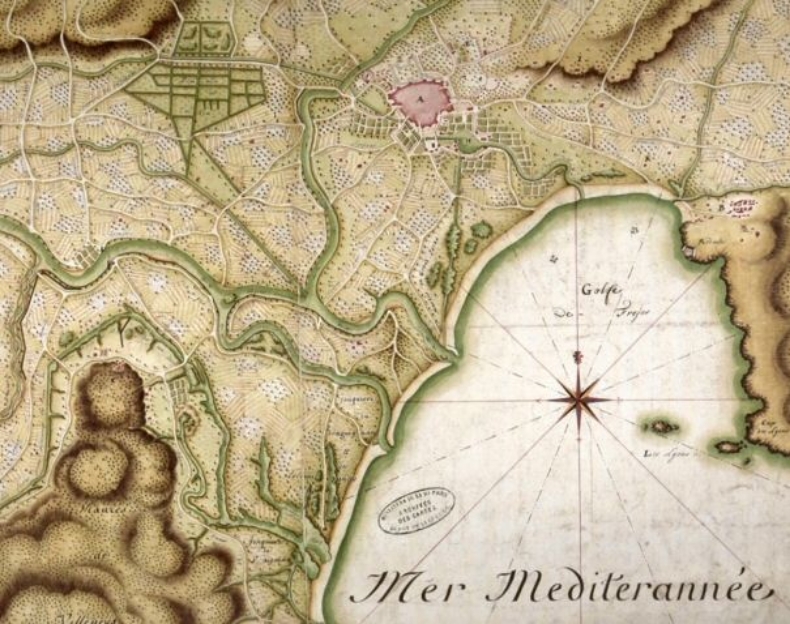 Now its time has well and truly come. Fréjus didn't miss its rendezvous with the future. On 12 July 1989 came the official commissioning of Port Couronne, representing more than 10 years of work by a team of men and women determined to give shape to their ambition: to restore to Fréjus its maritime tradition.
The result is in line with their expectations: with a geographical size of 7.2 hectares, a 65-metre wide opening at the entrance, a breakwater jetty 220 metres long, 706 rings for boats from 5 to 30 metres in length and more besides,
Port-Fréjus immediately stood out as one of the main marinas on the Mediterranean coast.
Yet the very design of the port distinguished it from others and made it a truly innovative and original realisation. Indeed, Port-Fréjus is not simply a port receiving boats of all sizes like many others on the French Riviera. It is also a large neighbourhood in its own right with 3,000 dwellings, entertainment and a buzzing ambiance.
Back in 1992, this innovative concept proved attractive with all those who considered the French Riviera to be a leading centre of attractiveness for the southern Europe of tomorrow. 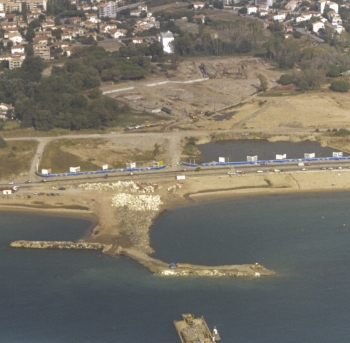 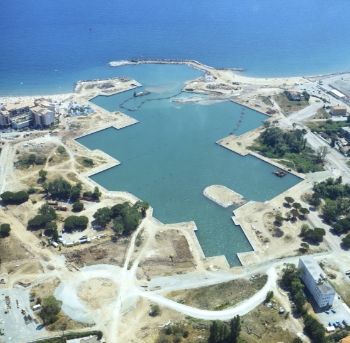 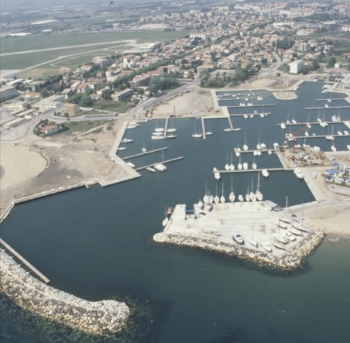 Photos from the construction of the Port Fréjus basin (the 3rd photo was taken in September1990.
Photo credits (3 photos): Robin Hacquard (official photographer for Fréjus town)

To build this new neighbourhood, the Town worked for months with a team of legal experts, city technicians, chartered accountants, town planners and architects.

The consistency of the Port-Fréjus neighbourhood was based around a navigation canal opposite the bell tower and connecting the current port with Avenue de Provence.
Several basins punctuate the canal and offer additional rings for pleasure boaters.

Apartment buildings which are respectful of the environment line the canal, where walking paths have been constructed. The spacious apartments offer year-round housing to active residents.

Now entirely filled in, Fréjus old port, whose remains have been listed as a Historic Monument since 1886, is an artificial basin, dug out of the marsh land which lined the rocky outcrop on which the town was built. It is therefore located inland, approximately 1,200 m from the sea.
In ancient times, the shore was approximately 900 metres from the port. You can follow the canal which connected the port to the sea for 460m, thanks to a crenellated wall which ran along its west side. The basin is shaped like an irregular polygon, measuring around 17 hectares. It was surrounded with quays and was limited to the south by a 560m long parapet. The entrance of the port featured a construction known as "Augustus' Lantern", which is, in fact, a daymark.

The hexagonal, 10m high construction, with a polygonal roof, lies atop an even older building, made up of two semicircular exedrae. To the north-west side of the basin, archeological excavations have unearthed an esplanade leading to an inner harbour along slipways or inclined surfaces (beneath Porte d’Orée car park). The port, which has remained almost entirely intact since Antiquity, was used during the Middle Ages and right up to the 17th century, when it was known as the "Étang" [Pond] because its surface area had significantly diminished. Fréjus Port, which served battle ships captured by Octavius-Augustus from Cleopatra in 31 B.C during the battle of Actium, is one of the most important maritime sites of the Roman world.

This was not a door but in fact an arch which was part of the imposing thermal baths (2nd century AD) located along the antique port. There were also other bathing houses in Forum Julii.

Overlooking and framing the port on the west and north east side, these large dwellings were built during the reign of Augustus, perhaps only a few years BC. Erected using a considerable amount of backfill held in place by walls, these buildings did not have a defensive purpose. Due to their imposing size, we can imagine that they were large public and residential constructions, for example housing the Commander of the Fleet or important magistrates. Their walls are adorned with decorative pink sandstone rubblestone, typical of constructions from Forum Julii.

This 10-metre high tower is composed of a hexagonal base, topped with a 6-sided pyramid and a bevelled ridge, separating the latter from the base. It is very probably a daymark, indicating the entrance to the Roman port.

For a long time, at least in the 1st and 2nd centuries, the port served battle ships and coast guard embarcations. Bordering a busy maritime route, connecting Italy, Marseille, Narbonne and Spain, it also offered trade ships, sixteen hectares of basins, lined with quays and protected with walls, communicating with the sea by a canal.

The sea added its riches to those of the land. In particular, fishing enabled the production of 'allec', a kind of garum [fermented fish sauce], made from rotting fish.

In 1970, in Fréjus, during archeological excavations on the site of a Roman dwelling, a white marble hermès bicéphale was unearthed, probably dating back to the 1st century AD and which has been housed at the Archeological Museum ever since. The bust, a symbol of the Town, inspired the artist who created the imposing fountain which embellishes Porte d’Hermès.